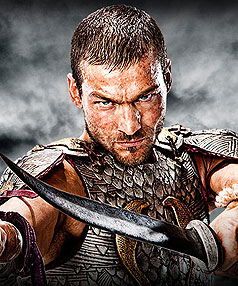 Maybe the first ep was a bit over hyped and the expectation was too high.  Or maybe the cast and direction was in *ahem* 'bedding in' mode before things settled down.

But now, the characters are more delineated, to my ADHD attention span, and a lot of the politics has been dealt with  - so we're left with a good old' protagonist/antagonist classic yarn with some interesting B plots ticking away in the background.

Kill or be killed - get the baddies, find yer wife, don't get distracted by naked Roman totty, live happily ever after ...

Spartacus has just kicked the living shite out of, and decapitated in slo-mo (with two swords no less)  the baddest Gladiator known to mankind - Theokoles (whose nickname is The Shadow of Death).
'Hi I'm Theokoles.  Most folks just call me The Shadow of death. Can I interest you in life insurance?'
BTW - did he suffer Post Mortem Depression?  Like - realising that you are dead, and being really pissed off.

By happy coincidence, the drought breaks, and rain pours down as Theokoles torso spurts fountains of blood.  Surely the gods have smiled on Spartacus!  He's a Top Bloke - he's The Man.

Cue - celebration, chicks getting their boobs out, and cheering from the hoi polloi.
Roll the credits.
Posted by Phil at 4:02 PM