Natural Wines (What's in your wine?) 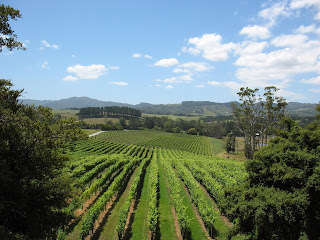 Recently I attended a Wine Writers of New Zealand tasting and debate on Natural Wines, at the fab Molten restaurant in Mt. Eden, with a fine dinner to follow.
There is a worldwide trend in wine making and grape growing, where little or no chemicals are used in the process.  This has been variously called: organic, natural and sustainable.
However, those three categories are subject to a lot of debate - both within and outside the wine making fraternity.

Is organic wine – wine that is made from organically grown grapes, yet contains some chemical additives in the winemaking process?  Does Natural wine equal Organic wine?
Sulphur dioxide (preservative 220) has been used since Roman times to preserve wine.  Egg white is essentially natural and possibly organic, but has also been added as a clarifying (fining agent) for hundreds of years.  But does it make a wine unnatural if you add an animal product to fermented grape juice?   As someone in the debate added – it’s all very well saying that wine should have as little human intervention as possible but grapes don’t pick and squash themselves, so humans have been happily intervening with grape crops for thousands of years in order to make an alcoholic beverage.

Another hot topic was whether winemakers should be obliged to list all ‘artificial’ ingredients on the bottle.  Nowadays many will state common additives like S02, egg white and fish products (isinglass derived from fish bladders is used for fining), the latter two often listed in case the drinker has allergies, though the traces in the wine may be non-existent or  a few  parts per million - and highly unlikely to cause any reaction.  Yet – many other additives are commonly used to tweak a wine’s final character.  These include unfermented sweet grape juice, tartaric acid, cane sugar, enzymes, commercial yeasts, copper sulphate, ammonium bisulphite, casein, edible gelatine, diammonium phosphate, and many others.
Food labelling requirements are very stringent and we are all used to seeing the microscopic font sized lists on anything from muesli bars to fruit juice.  Should winemakers be exempt from stating their ingredients?

My gut feeling is that wine is a product made in the 21st Century and like any food or drink does require some degree of human  intervention to maintain  standards and optimise
flavours and longevity.  I can live with a bit of albumen or copper sulphate in my wine. But I would like to know what’s in there.
Posted by Phil at 10:21 PM 2 comments