Some Big NZ and Aus Reds 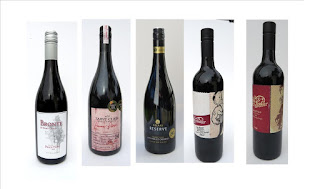 It looks like winter is still with us for a month or two before we head into spring and the grapevines burst into life again.  And this time of year in Auckland in the vineyards , pruners are busy removing the old shoots from vines before the sap rises.  While vines are dormant over winter, this is the time to get in and trim off the old dead wood.  Not unlike rose bushes, the vines are pruned vigorously. The vines are cut right back to often just one trunk with two or four lateral branches left before spring kicks in. (See the video on my blog).  Work never stops in the vineyard and winery – it’s a 7 day a week job for many people in the business.
Meanwhile hare’s a line-up of hearty reds for cooler nights (and days).

Phil Parker is a wine writer and operates Fine Wine Tours in Auckland.
Posted by Phil at 9:22 PM 0 comments

For all its distance, New Zealand seems to have an endless fascination with the food, wine and culture of Italy.  And not unlike the rest of the world, we have been eager to embrace panini, espresso, cappuccino, pasta, pizza, Chianti, Prada, Versace, and a whole bunch of other stuff ending in a, e, i, and o. So, this year’s wine holiday was the most ambitious to date – Italy, with focus on the Chianti region in Tuscany.

We flew in on Emirates, via Dubai.  The idea was to avoid all the security hold-ups associated with a transfer at LAX.

I can report that Dubai is smelly, humid and extremely hot, with an airport terminal like something out of the Star Wars bar scene – many, many people of different cultures in strange clothes buying duty free like there’s no tomorrow.

We had three days in Rome, then another three in Umbria.  Hiring a rental from Perugia, I drove nervously out of the city in our very comfortable Lancia automatic with no major trauma other than somehow ending in a bus-only lane which was running contra to the other peak hour traffic.  A judicious U-turn soon had us hopelessly lost, again in short order.  However we eventually located our B&B in Bastia – about 30 minutes away as dusk fell and tempers frayed.

Umbria was quiet and charming – endless fields of sunflowers and good affordable and very drinkable local wines from our nearby supermarket at about 6 Euros a bottle.

Onward to Tuscany, by the very efficient Trenitalia rail network and local buses, we first stopped in San Gimignano – a walled hilltop township.  Dating from around the 10th Century, San Gimignano is a fortified town featuring the classic Tuscan terracotta pink and honey, brick and tile buildings.  Very much a tourist town now, it boasts numerous restaurants, a museum of religious art and a wine museum. The Basilica of Santa Maria Assunta has frescoes by Sienese school artists Bartolo di Fredi and Taddaeo di Bartolo. 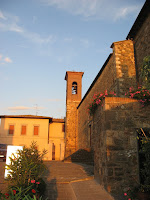 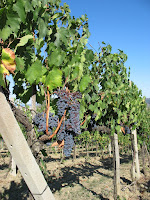 But the highlight of the trip was definitely Montalcino, another fortress town dating back to the 14th century.  The whole township is easily traversed by foot and has a permanent population of about 5,000.  Spectacular postcard views of the Orcia valley are around every corner, giving panoramas of the region’s olive orchards, vineyards and wheat fields as they stretch into the hazy distance.

Renowned for the iconic Tuscan red Brunello, Montalcino is the most famous Chianti producer in the region.  Brunello is a 100% Sangiovese, produced and branded under very strict regulations.
Grapes have to be grown within the Commune of Montalcino, and ageing for two years in oak casks, plus a further 4 months in the bottle is obligatory.  208 producers make around 290,000 cases in total, of Brunello per annum.  The name Montalcino is a protected brand, like Champagne, and can only be applied to another red, Rosso di Montalcino and a white – Moscato di Montalcino.  Brunello retails in Italy at anything from 40 Euros upwards.

Few local vineyards are open for cellar door tasting, and only by appointment.  The best way is a hosted tasting at the Enoteca,  a wine boutique, restaurant and tasting facility.  It is located in the Fortezza, the castle keep – the last resort for siege in medieval battles.  I was treated to a line up of five Brunellos – Cerbaiona ’98, Banfi Riserva ’95, Capanna Riserva ’99, Poggio di Sotte ’01 and Cupano ’01.  The clouds parted and I heard bits of the Hallelujah Chorus.  These are glorious wines – full ripe and rich, with dried fruit old wine characters, soft tannins and lingering aftertaste.

Montalcino is also renowned for honey, extra virgin olive oils, and local cheeses like Pecorino.  Many restaurants and cafes make the best of local specialty produce. In fact, best meal we had in Italy is Trattoria Il Leccio – located in a small village – St. Angelo in Colle, just outside Montalcino. Other attractions include San Quirico d’Orca – a thermal spa town going back to Etruscan times, with many churches, gardens and upmarket tourist accommodation. 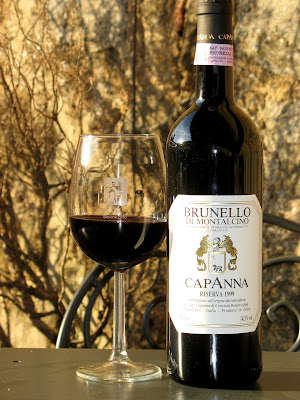