Yesterday there was a large tasting of wines that are under the umbrella of Negociants NZ - a significant player in our NZ wine retail industry.  In addition to distribution of local brands, they also import wines from around the world, e.g. Australia, Spain, Italy and France.

Now, the temptation at these events (speshly for newbies) is to run from booth to booth sampling everything on offer from whites to reds, over and over, and getting rat-arsed drunk in short order.  We seasoned tasters are a tad more discerning.  I decided to focus on three grapes - compare and contrast Gewurztraminer, Chardonnay, and Pinot Noir.  And Okay some Aussie Shiraz.  And, oh, alright, some Cognac and Single Malt whiskey.

So I started out very organised.  I wrote notes in the folder.  I spat out all samples.  I sniffed and swirled; looked perky and asked questions - and looked informed, dashing and thoughtful.  That's they way we all start out - but somewhere along the line, alcohol gets absorbed and you get a wee bit loose about the whole process and things become somewhat unfocused.
For some reason the thin stream of wine doesn't quite stay linear or hit the centre of the spittoon. The free pen and tasting notes seem to be mislaid between samples and searing insights into vinous structure and longevity.  Consonants become difficult to pronounce.

Anyway by the time my charming assistant picked me up in her car I was ready to go home.
The Winners are ...

Phil's Top Six and a Half Wines for June 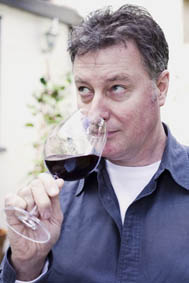 I have personally sampled and selected the best 6 ½ wines I have consumed in the last three months or so.  It is completely subjective but any contradictory opinions may be mailed to me on the back of a post card, whence they will be shredded and converted into eco-friendly egg cartons or used as mulch for my strawberries.

Bourillon D’orléans Vouvray Sec 2009  $33.00
Vouvray is an appellation from the Touraine region of the Loire valley in France, and refers to wines made exclusively from Chenin Blanc.  The style can vary from bone dry through to sweet and even sparkling – and often the label doesn’t tell you which is which. Luckily I have sampled this wine for you and taken out the guess work.  This has very upfront fruit, unusual for a French wine - with flavours of pear, quince and honey and a dry, spicy mineral finish.  A lovely balanced wine.  Fine as an aperitif or with seafood and Asian cuisine. (From: www.glengarrywines.co.nz)

Nga Waka Martinborough Chardonnay 2010  $25.00
One for lovers of a big, fruit-led buttery style, this is a full bodied and voluptuous wine.  A Marilyn Monroe compared to Babich’s Gwyneth Paltrow.  It has a rich palate of crème bruleé, golden queen peach, poached pear, toast and vanilla, with a lengthy finish which just draws you back for...just …one …more sip. (From: www.glengarrywines.co.nz)

Gravel Ridge Martinborough Pinot Noir 2011 $20.00
Another example proving that Martinborough can produce Pinot on a par with Central Otago.  Deep garnet red in colour.  Seamless and velvety soft, with carnation and savoury smoky aromas.  Flavours of black currant, stewed plum spice and a hint of vanilla. (From: www.finewinedelivery.co.nz)

Osawa Prestige Selection Pinot Noir 2010 $45.00
And, just to show that Hawke’s Bay isn’t just about Syrah and Chardonnay – here’s a fab Pinot from Japanese millionaire Taizo Osawa’s vineyard.  Soft and rounded, this is a Pinot that hits all the buttons.  Aromas of tar, pot pourri and spiced cherry. Flavours of black boy peach and dark berry fruits. (From: www.finewinedelivery.co.nz)

Babich Irongate Cabernet Merlot Franc 2010 $30.00
Another Gimblett Gravels wine from Babich, this one is a ripe and intense red blend of Cabernet Sauvignon, Merlot and Cabernet Franc – roughly 1/3 of each variety in the blend.  Warm and generous, this wine opens up in the glass, showing its Gimblett pedigree with black berry fruit, plum pudding and mocha flavours. It finishes with savoury notes and soft tannins. (From: www.babichwines.co.nz)

West Brook Marlborough Late Harvest Riesling (375 ml) $29.00
And not forgetting the sweet wines that are so good with a cheese board or (my favourite indulgence - French Toast) a late harvest Riesling from Kumeu’s West Brook label. This is a ‘non-vintage’ blend of three different years’ Riesling from Marlborough; all brought together under the capable hands of winemaker James Rowan. Fabulously intense raisin, honey and mandarin flavours with a finely balanced crisp acid finish.
(From: www.westbrook.co.nz)