Coincidental with the dreadful news from Christchurch I recently received a sample pack from Main Divide – which served as a reminder of how good the wines of Canterbury are. Waipara, where Main Divide is based an hour north of Christchurch, is a boutique region that often gets ignored in favour of the big players like Marlborough and Hawkes Bay. It remains my favourite region, for its fabulous wines, food, scenery and friendly people.

Main Divide is the second tier label of Pegasus Bay, a label owned and operated by the Donaldson family since the early 1970’s.

Ivan Donaldson is a consultant neurologist, wine writer and wine judge. His wife Christine is still involved in the business though directs most of her energy into maintaining the winery's extensive grounds. Winemakers are eldest son, Matthew who graduated with a degree in winemaking from Roseworthy College in Australia, and his wife Lynnette Hudson, who has similar qualifications from Lincoln University. Another son, Edward, is Marketing Manager and his wife Belinda supervises the Pegasus Bay Winery Restaurant.

Paul, the youngest son, has an MBA degree and works as General Manager for the company.

Lush and slightly sweet, this is a big bodied Pinot Gris with flavours of grape fruit, pears and a hint of honey. It was fermented and then aged for a while in French Oak.

Two years in oak barrels has added depth and complexity to this stunningly good value red. It has hints of pot pourri with medium tannins, sweet ripe black cherry, spice and liquorice. Yum! 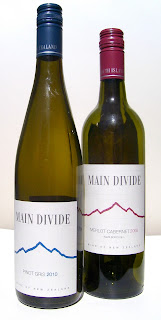 OK - yesterday I had 4 clients in my vehicle.  All very fine till we got to lunch.

Front seat passengers when exiting, remarked on a thin string of blue stuff attached to their wine purchase.  I investigated.  The bright aqua blue gunk was in fact chewing gum.  Not only was it stuck to their wine carton, it was also firmly attached to the vehicle nylon carpet in a sticky blob about half an inch square.

SOME BASTARD (gender neutral) not only took a wine tour, but also had the mindlessness to CHEW GUM on a wine tour.  For the unwashed - this is akin to farting in the Sistine Chapel, or saying the N word near the President of the USA.  Not only did they chew said offensive oral garbage, but they somehow managed to drop it on the carpet ... without noticing...or owning up to it if they did notice. BASTARD!!!

So - I'm reduced to Googling E-How.com for the best advice as to how to remove bright aqua blue chewing gum from carpet.  They suggest: place an ice pack on the gum for 5 minutes.  This will freeze the gum solid, making it easier to remove in chunks.  Any residue may be cleaned off with Carbon Tetrachloride (dry cleaning fluid).

I did the ice trick - moderately successful, but still gum entrapped in the carpet fibres.  I have no Carbon Tetrachloride.  So I had a glass of Pinot Gris followed by three glasses of Chardonnay. (These were administered to myself and not the carpet, I might add.)   Then I decided to leave it till the morrow - whence I will try Bug 'n' Tar Remover - or methylated spirits or mineral turpentine.

BUT ... Shame On You -  GUM BASTARD!  May you choke on your gum.  May any Heimlich manouvre do nothing more than pop wax out of your ears, and may all your cellared wine be cork tainted by horrendous amounts of  trichloroanisole.

For a number of years, I have been periodically donating my vital fluids for the betterment of humankind.

No but seriously, I had long nursed the delusion that I had a rare blood type like my father (O Rh-ve), and thought that I really should have some on hand in case I became exsanguinated for some reason in the future. Or some similar rarefied type needed a top-up.  So I went along and ran thru the procedure only to find I was good old common O+. I have the bog standard O+ blood type - the Regular 91 of the blood world - which is compatible with all the others.  Somehow I felt let down.  It's a tad like finding out that you're not really related to an ex-All Black, having dined out on it for years.

Anyway, they call up about thrice a year and off I go the Blood Centre. It's all very low key.  You fill out a form certifying that you haven't slept with Keith Richards or used needles recreationally and stuff like that.  You go through to a little room where they stab you in the finger with a little clicky stabby thing.  Today I had a charming but almost incomprehensible Thai nurse who was so enthused that she stabbed herself with the clicky stabby thing. 'Ow. It slip!'

Yennyhoo - I was OK, my iron levels are good and I was allowed thru to the open plan room with lots of couches and machines that go ping.  It was rush of blood hour - just after lunch and all beds were taken, largely with donors like me or occasionally people on dialysis.  We hearty donors exchange the odd nod of benevolent conspiracy - Yes, me too.  Doing my bit.  And I never realy thought much more about it until today - I spied a heartfelt thank you letter from a young mother.  She had haemorrhaged massively after childbirth, losing more than 4 litres of blood in short order.  Had it not been for a good supply of  O+ she would not have lived to bring up her brand new baby boy.   Makes you think.  Hey - that could have been MY blood.  I could have saved a life.

I felt humbled and surprisingly emotional.
Posted by Phil at 9:13 PM 1 comments

Alexander The Kind of Average

Sneaky Stallone
Posted by Phil at 12:57 AM 0 comments

The game is :  Famous People Before They Were Famous

This is very similar to . Famous Movie Prequels