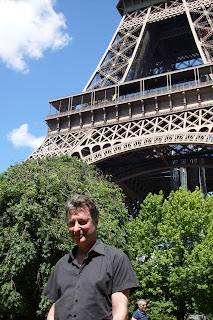 As I have said previously, France in general and Paris particularly, broke a lot of the old clichés about French culture.  For example - the streets were not covered in a minefield of dog poop,  Paris was unpolluted, you could drink the tap water, the locals were friendly and welcoming, eating out wasn't expensive, and most people spoke good English.
One thing I had forgotten was the smoking culture in France.  Everyone smokes.  We gave up on sitting outdoors at cafes and restaurants because of the constant clouds and billows of rank cigarette smoke from neighbouring tables.  Sadly, the teenage and 20-ish crowd also smoke constantly.

Maybe because it was early summer and the moneyed folk had left town for vacation destinations, but the street fashion was very dull.  I had expected to see exquisite young women in Yves St Laurent, Chanel, Lacroix and Gaultier ...but no.  The default fashion was tight jeans, loose cotton tops, no makeup and a smoking cigarette.  The women looked pallid and unhealthy.  Interestingly it was the African French men and women who were more often than not impeccably dressed and groomed.

On returning to NZ I was reminded at how attractive our women are.  The Polynesian, Maori, Asian and European young women here look positively glowing in comparison.  On my first Saturday night shift at the wine store I must have seen about ten absolutely stunning and well groomed young women.

Other odd stuff:  shopkeepers don't like giving change.  Try to keep a stock of 1 and 2 Euro coins.  We tried to buy a 1.50 Euro bottle of water at a convenience store and the shopkeeper refused a 10 Euro note.
There is almost no free public seating outdoors (maybe it's a tacit deal with the cafe owners).  The  few places to sit down and eat or drink are small gated parks - often with gravel and no grassed areas.
Pedestrian crossings have two phases - one green light will get you to the median strip, but the lights may change to red and you're stuck in the middle till the next green.
Restaurants sell half bottles of wine at a reasonable price.
All restaurants offer a 'formule'  set menu - often three courses for about 20 Euro.  Servings are huge and we often shared one formule dinner between us.
Order a hamburger and they ask you if you'd like it medium or rare.
Occupational safety is very loosely monitored.  Construction sites merge with footpaths.  A restaurant in Lyon had a small swing door between the single  unisex toilet and the kitchen, with a box of wine glasses perched on the cistern.
Charles de Gaulle Airport has an enclosed box-like smokers' lounge which leaks cigarette smoke out into the concourse.

For all that and because of all that, we had a great time.
Au revoir France!  A bientot.

A recent wine trip to France took me to one of my favourite wine producing regions, Alsace. 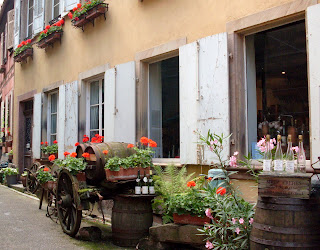 The political history of the Alsace wine region has been a literal tug-o-war between Europe’s major powers for centuries. Since 1870 France owned it. Then Germany. Then France. Then, return service - back to Germany. And finally … back to France.  Could have saved themselves all the bother, really.  This cool northern European region produces white wines with intense fruit flavours and aromas – often referred to here as ‘aromatics’.  The main grapes grown in Alsace are Riesling, Pinot Gris, Gewürztraminer, Pinot Blanc, Sylvaner, Muscat and Pinot Noir.

The region is very picturesque, with ancient villages dotted around the lush green landscape, and neat rows of vineyards climbing the south facing hillsides.  We hired a car from our base in Colmar and navigated with a combination of Google Maps, asking directions and sheer good luck.  (They had no GPS available at Avis.)

Anyway, I was lucky enough to sample some wines at two local producers, Gisselbrecht and Louis Sipp.
Claude Gisselbrecht is third generation winemaker in the winery located about 40 minutes from Colmar on the ‘Route du Vin’ which stretches all the way north to Strasbourg.  Claude is passionate about his family’s wines and showed us through the winery – where huge old wooden casks sit alongside state of the art stainless steel equipment.
My picks:
Cremant d’Asace NV – a traditional bottle fermented sparkling wine made from Pinot Blanc and Pinot Noir.  Pear/apple flavours with a crisp clean finish.
Muscat 2010 – dry and fruity with raisiny flavours and a lengthy finish.

Then back nearer Colmar to the quaint village of Ribeauvillé, to visit Lois Sipp winery, hosted by 4th generation Etienne Sipp.  Etienne was kind enough to show us through the wine cellar and then take us in his 4WD to see the steep organic vineyards with their stony soils containing marl and granite.
My picks:
Rotenberg Gewürztraminer 2010 – intense and mouth filling wine with spice and ginger flavours and a dry finish.
Osterberg Gewürztraminer Late Harvest 2006 – lush and sweet, with honey flavours and lengthy finish.

(Special thanks to Liz Wheadon of Glengarry Wines for arranging the winery visits).
Phil Parker is a wine writer and operates Fine Wine Tours in Auckland.
www.insidertouring.co.nz
Posted by Phil at 6:39 PM 0 comments

I am currently on Holiday in France.

Paris – the City of Love.  Paris the City of Arrogance.  Sophistication, fashion, cuisine … so many clichés and stereotypes.

From my experience it is all of those things and none of those things.  We had only three days there but I had visited in winter 1989 just as the Berlin wall had fallen in Germany.  The European winter is something special and Paris was cold but sunny then and bedecked with tasteful Christmas decorations.  Then I did the Arc du Triomphe, Versailles, Pompidou arts centre, Museé Rodin, and The Orangerie.   I stayed in a rickety old left bank hotel and ate Chinese on my first night.
This time around I had the chance to see the Eiffel Tower up close (couldn’t be buggered queuing for the lift to the top).  It is huge.  Also we did a day trip to Versailles, and the Montparnasse street markets and cemetery.  We stayed in a Marist Brothers’ hostel for just 46 euro a night, including the standard French petit déjeuner of crusty baguette with jam, cheese and coffee.

I didn’t quite get it last time in France, but I realise that bread is the staple carbohydrate of the nation.  Bread is eaten with every meal; and as a snack between meals.  There are stacks of baguettes behind the counter in gas stations where you would normally expect chewing gum.  Baskets of bread immediately appear on your table at any bistro or restaurant.  A friend told us that the government tried to convert the masses to potato consumption hundreds of years ago by planting fields of spuds, loosely guarded by gendarmes to give the impression that they were valuable and worth stealing.  It was a total failure.
Now, to Parisian arrogance and rudeness.  Nope.  All but one person we met in three days of dozens of interactions, were helpful, charming and indulgent of our tourist French language skills.  The only time  we struck anyone rude was at the oxymoronic ‘Information’ booth at the St. Jacques Metro station.   I think they have retained just one rude bitch from hell information lady as a relic for posterity.  This one was a doozy.  She spat her apparent incomprehension of my stumbling  French pronunciation mockingly back at me, with an icy stare in rapid fire French, and by way of help shrugged and jerked her thumb at the automated ticket machine.

When he's not away overseas being an international man of mediocrity, Phil runs Wine Tours in Auckland
Posted by Phil at 2:15 PM 1 comments