Okay - my partner's daughter is about to turn nine years old and is totally fixated with the Harry Potter film series.
So this has given me the opportunity to rent HP  DVDs at will, and further indulge my magical fantasy appetite - unquenched since discovering The Hobbit and LOTR as a yunkster myself.

Now, as a Grown Up, I realise how totally cool it would be to have a magic wand and be able to cast spells a la Harry and his Hogwarts pals.

Therefore ... I propose a number of spells appropriate for the 'over forties'.
Now.  Standing firmly.  Feet slightly apart. Focus .... Unsheath your wands and ....

Conjuctivitus!  (Your enemy is rendered helpless by bloodshot eyeballs.)

I picked this one up at our local Pt. Chevalier Countdown for about $12 .
Being winter here in NZ I am always on the lookout for a good value red to go with heartier cold weather food.

'Point Chev' as it's known to locals is a peninsular suburb a handy 10 minutes from downtown Auckland City yet blessed with beach walks, wide largely quiet streets and a few good cafes.  Not quite as expensive as Westemere, nor as terminally trendy as Ponsonby.

In the old days Pt. Chev was unfortunately associated with Carrington Hospital - a sprawling grim brick and tile Victorian era mental illness complex which now houses Auckland University of Technology.  Point Chev still has its share of eccentrics, and the local shopping is a tad underwhelming - with $2 Shops and ethnic fast food outlets predominant.

Which is a very roundabout way of getting to the point that Countdown/Foodtown supermarket has feck-all of a decent wine section.  All the reds get lumped into one aisle, whites on the other side and specials at the head of the aisle.  The discerning wino would probably travel to Countdown Grey Lynn for a more eclectic wine selection (plus the chance to play Spot The Minor Celeb with TV folk, Creatives and Ac-Tors thick on the ground).

Yennyhoo - The Wine:  Aromas of hot vineyards from Abbruzo's mountainous Adriatic coast.  Ripe, acidic and fairly assertively tannic, this is a big wine - not really yer sipping vino before The News at Six, but something better reserved for a big and hearty casserole of beef or a steak.  Ripe black cherry, black olive, and that astringent harshness that you get with a lot of Italian reds.  To be honest, I don't know whether I like it that much.
As I get older, I have lost my love of stonking great reds like Aus Shiraz and Cabernet blends - and tend toward Pinot Noir as the red of choice.  But that's just me.

Anyway, time for a gratuitous plug for my Auckland Wine & Food Tours ... Ciao !! 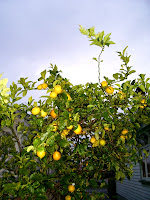 On a cold and gloomy day in Auckland with brisk south easterlies hammering the windows, it's not a bad option for an underemployed wine tour operator during off season.
Being somewhat of a lemo-holic, I couldn't stand seeing a bunch of lemons going to waste on our  burgeoning shared driveway lemon tree.   So I Googled a recipe, Here it is whipped ten lemons from the tree and got to work. 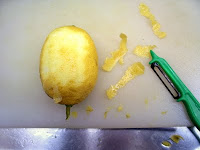 It seemed one of the simplest recipes I could find anyhow.

1.  First up, peeling the yellow skin thinly from the lemons, making sure not to include any of the white pith - which will make the jam bitter. Then slicing the skin finely. 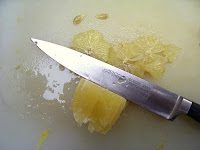 2. Taking the pith.  Slicing all the pith from the skinned lemons and slicing them into 1/4" slices. 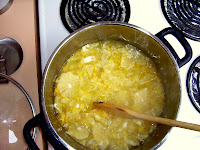 I followed the recipe fairly closely, though couldn't be buggered leaving the sliced lemon and skin and water in the fridge for 3 hours.  Don't these people know what a four-person household packs into a fridge?  And I added an extra cup of sugar as these are winter lemons and not the sweet summer sun-kissed variety.

Finally - I get four small-ish jam jars of lemon marmalade!  I just heated the jars in the oven and poured hot jam into the preheated jars, then screwed the lid on.  This is what you get from ten large lemons.

Verdict: extremely lemony - probably for extreme lemon fans.  Would be OK with honey on toast - or added to other dishes needing a lemon hit. 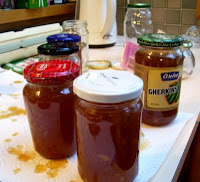 One of the nice things about our cooler weather is that it’s an opportunity to drink some red wines.  White wines are fine of course but winter means that you don’t want to chill them – they taste much better at room temperature when it’s cold outside.

Red wines can benefit from being warmed up slightly above room temperature.  (My old trick – in case you missed it, immerse the unopened bottle of red in a basin of medium/hot water for a few minutes. Dry off, open, enjoy). Warming releases the aromas and softens the wine.

Okay – on with the hunt for a bargain red wine. I got lucky with a couple of reds plucked from the supermarket shelves this week.  This can backfire of course, but if you’re gambling less than ten bucks then it’s not a disaster.  From experience, any bargain wines in the seven dollar range are usually disappointing.  There seems to be a threshold at $9.99 where they become drinkable.

First up:
Pete’s Shed Central Otago Matai Block Pinot Noir 2008 $12.99
This is a label purpose made for Progressive Enterprises supermarkets (Countdown, Fresh Choice, Woolworths etc.). The 2009 version was given less than favourable reviews for being under ripe, but this one’s a ripper.  Silky soft tannins and ripe dark berry flavours give way to spicy savoury notes and a lasting finish.

Taylors Oomoo McLaren Vale (Grenache/Shiraz /Mourvedre blend) $11.99
The label is a reproduction of an old Taylors wine label - featuring emus and kangaroos!  Oomoo is allegedly an aboriginal word for 'tastes good'.
South Australia’s Mclaren Vale is a producer of some pretty grunty reds like Cabernet and Shiraz, but this is a softer take on the Great Aussie red.  The Grenache/Shiraz /Mourvedre blend is a mix you see in Aus – often called GSM for short.  This one opens up with lovely black pepper, plum pudding and a liquorice aromas.  On the palate – chocolate, plums, black cherry and fig, with medium tannins.  A great match with a hearty beef casserole or venison.

Now then.  All sitting quietly?
Good.

Then I'll start.
By some sort of osmotic process - being around for about ten years and publishing the odd wine article, I seem to have become a Wine Writer.  This is pretty cool.  But I see myself as a Wine Journalist - i.e. I do have an insatiable curiosity about wine, but I make no claims to being an Expert.

So, anyway I get invited to the odd wine writing event now and again. I.e. - a chance to taste and evaluate wines gratis - which is great.

Yennyhoo.  I got to taste a bunch of wines distributed by Appellation Vineyards Ltd.  There was a huge array of wine from many labels, and I was late on account of being in the process of moving house and a whole lot of other stuff.  I was The Last Writer to show up.  But they folks in control of the show were very charming and left me to wander, pour, sample and spit to my heart's content.

The Winners on The Day ...the envelopes, please.

Sauvignon Blanc ...None.  I hate the stuff 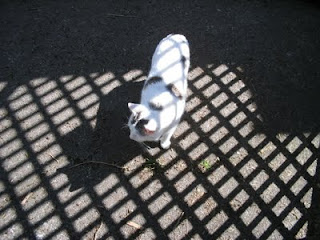 Okay.  Snowy is an ex-stray cat.  He initially schmoozed me at my physiotherapy clinic as a cute kitten, playing in the sunshine outside the door until we caved in and started feeeding him.

He is now a self-centred, contemptuous, vindictive, devious, intelligent, and nasty 12 year-old cat.  He is, in short, a total bastard.  A sort of feline Severus Snape.  If ever there is an animated feature starring Snowy, Alan Rickman is a shoo-in for the character voice.

As a result of moving house about 6 weeks ago I managed to move the amiable goofy and lovable 11-year old Black Lab Jasper with no problems. His new pal George (see pic) the Maltese/Shitzu/Yorkie-cross took control immediately and assumed power in return for snuggling Jasper in cold weather and licking Jasper's eyes every morning.  (Yeah - dunno what that's all about - hey, dog culture is weird).  But he has finally stopped humping Jasper - which I take as a good sign.

Snowy's transition, on the other hand,  was a whole new ball game.  George unfortunately is a hyperactive cat-seeking missile on four tiny legs.  He barks and screams hysterically if he sees any cats near the property.

So the whole Snowy installation was a military operation.  We snuck him in one day when George was at the kennels, left him in our upstairs bedroom and put a baby gate at the top of the stairs. Snowy cowered under our bed for two days not eating.  When he did eat, he crept out, crapped and peed in my jeans - which were on the floor - and crept back under the bed.  Finally he got the hang the dirt box, more or less, but with the odd displaced poo. 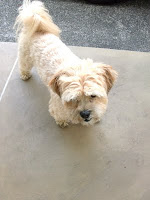 Snowy finally took the hint and explored the wider world - by climbing out the window onto the flat roof.  But not before depositing a few free form installations on said roof.  He then disappeared for a whole 24 hours - then returned, whence I caught him pissing on our bed (on my side) as a middle finger salute to moi for upsetting his life.


Now we have a Mexican standoff - with Georgie sniffing and growling through the baby gate and Snowy huddled up on his electric cat blanket.  He does use the cat litter-in-a-paint tray. He does spend a lot of time in out the window mode.  He is generally better behaved other than tearing at the carpet in the early hours to wake  me up when he's feeling lonely.

Youth In Asia has been muttered by my long suffering charming companion.