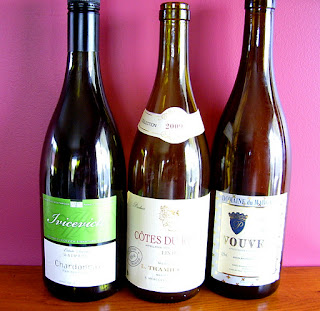 Yes - those bottles are empty.
They are now redundant wine-less vessels of Sunday night's epic rugby final BBQ - chez Phil and his charming assistant.  Not having the spare $NZ 3,000 plus, for tickets to the game, nor the industry connections to score  freebies, we opted for a night at home in front of the flat screen, with rugby fan friends and some good food & wine.  My TradeMe BBQ for all its eccentricity coped well with the flow of chicken wings, shrimps, sausages and steak - and a great time was had by all.
Lucky for me, two friends brought some damn fine French wines with them to share.  And I opened a bottle of my current favourite, West Brook's Ivicevich Estate Chardonnay.


West Brook Ivicevich Waimauku Estate Chardonnay 2004
Gorgeous Chardonnay at its peak after seven years in the bottle.  Golden and clear with aromas and flavours  of brioche, peach, nectarine and hazel nut.  Mouthfulling and seamlessly integrated, this wine lasts on the palate and draws you back for another glass.

Domaine du Margallau Vouvray 2009
Made from Chenin Blanc fruit from France's famous Vouvray region in the Loire.
Ripe and fruity wine with crisp acidity and rounded flavours of honey, pear and a hint of smokiness.

Cotes Du Rhone Linteau 2009
I can't find out much about this wine - other than it is Grenache-dominant blend from the Appellation Controlee certified producer.  Anyway - ruby red colour with slightly rustic and savour flavours, plus cherry, blackberry and plum, with a slight acidity.  Drinking very nicely now - even better in a year or two.


Verdict: wine and The All Blacks were the winners on the day.

Marlborough’s Clayridge vineyards was established by colourful winemaker Mike Just and his wife Paula.  Mike is a direct descendant of King Edward III, wears a black eye patch and his dark hair pulled back in a ponytail.  He also has a penchant for medieval sword fighting, and has chosen Edward III’s family crest as the brand to represent his Clayridge wines.


Mike and Paula planted their own Clayridge vineyard on the steepest slopes in Marlborough, plus they source premium grapes from Taylor Pass valley and the Wither Hills.

But when it comes time to pick the grapes, Mike makes use of the facilities at Marlborough’s Indevin contract winemaking company, which was established in 2004, and has a capacity to process over 8,500 tonnes of grapes a year. Indevin provides a full range of services to the winemaker, from pre-harvest grape analysis, to crushing, de-stemming and pressing, oak barrel ferments and ageing, to temperature controlled fermentation tanks, and final laboratory work prior to bottling.


Anyway - last night we nipped out for tapas at a local restaurant and I spotted the Clayridge Pinot Blanc 2008 on the wine list.  I haven't tried Clayridge wines for ages - the last time was at a wine trade show about 3 years ago.  Pinot Blanc is a distant relative of Pinot Noir - AKA Pinot Bianco in Italy.  This example is a gloriously lushly flavoursome fruity wine with earthy hints. Oily and mouth-filling, there are flavours of lime, quince, honeysuckle and minerals. Fab.  Me want more. 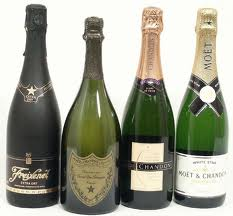 
I have never really liked Champagne. I've always found it acidic and and unbalanced - and never really understood the fascination with it. Weeell ... until I got to try the most expensive label on the planet - Louis Roederer's Cristal.


But anyway, wine is all about personal taste. Some like fizz - some don't.

There are four methods of producing a fizzy wine.
Those wine lovers, the French again got in on ground level by popularising their sparkling wines from the Champagne region. Champagne is the most northern wine region in France and lies north-east of Paris.


There is a bit of debate as to who was responsible for making the first naturally sparkling French wines. Generally, the Benedictine monk Dom Pérignon (1639-1715) gets the credit. French widow - Veuve Clicquot, discovered in the mid-1800s the best method of removing accumulated yeast from the bottle. Nowadays the word Champagne is copyrighted and fiercely protected by the French. Only wines made by the traditional method and produced in the Champagne district may carry the name.


Method 1. The Traditional Champagne Method. A dry, low alcohol base wine is made, sometimes blended from finished wines (as above) and even from different vintages. Just before sealing, yeast and sugar are added to the bottle. Then the bottle is capped, often with a beer bottle type crown seal, and the yeast mix begins a secondary fermentation, trapping CO2 – which gives the wine its famous finely beaded bubbles.
Depending on the quality of the wine, the wine and its yeast residue may be left undisturbed for one to ten years. The classic yeasty/bready flavour is derived from disintegrating yeast cells. The longer the wine sits, the more the desired yeast flavour is extracted.


The next bit is the good widow Clicquot’s method of gradually tipping the bottle from horizontal to vertical (this takes about two weeks), where the accumulated yeast sits in the neck of the bottle allowing for removal. The neck of the bottle is frozen and the yeast plug ejects under its own pressure. Finally, the bubbly wine is topped up with the dosage - a dash of wine and sugar to balance acidity, before sealing with a cork and securely wiring the cork in place.


Method 2. The Transfer Method. Basically exactly the same as above, but once bottle fermentation has finished, all the bottles are emptied into a large vat under pressure; the wine is filtered, then rebottled. This method still gives the wine the ‘rested on yeast’ character.


Method 3. The Tank Method. This is a bulk method where huge amounts of inexpensive sparklers can be made. Basically, the secondary ferment takes place in a sealed tank – where the base wine has been poured in and yeast and sugar added to kick off the whole bubbly process thing. The downside is that the yeast flavours don’t transfer to the same extent and the bubbles are coarser and don’t last as long. Still, it is a way to make affordable bubbly wines such as Prosecco, and Asti style Muscato. 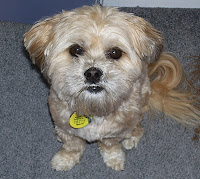 When I moved in with my charming assistant, I kind of realised that I was also moving in with a nine year-old girl and a 3 year-old Shitzu/Maltese/Yorkie cross called George.  (See pic.)
Do not look upon his image, brethren, he may assume other demonic forms.

My 11 year-old Black Lab Jasper was part of my moving in package.  And in his own amiable, lumbering, accommodating and goofy way he fitted in pretty well.  As long as Jaz has a place to lie down and gets a feed and a walk each day he is extremely content.

So Georgie figured Jaz for a gentle giant and decided to take the upper hand and tried to dominate Jasper for the first few weeks, by humping the few bits of Jasper within reach of his little legs, snatching food from Jasper's plate, snarling at Jasper if he competed for affection, racing to be the First Dog at The Water Bowl after walkies. And engaging in very one-sided play fights - where George would snarl and hang on to Jasper's face and other appendages - till swatted away by the ever-patient Jasper.

Now they have settled into a fairly happy domestic relationship - George pretends he's the boss most of the time, but is not above snuggling into Jaz for a nap on a cold day, or licking his eyes every morning as some of canine facial grooming service.

I am greeted daily by George when I awake groggily trying to focus on the new day.  The first warning is the thumpitty-thumpitty-thump - as Georgie flies up the stairs.  Then a momentary pause while he launches himself toward the bed.  Then the final crash as George returns to earth - often landing upon my person in an alarmingly waking-up manner. This is followed by a furry, wet Good Morning kiss and a demand to be let under the covers, whence he snuggles up and lies completely still.

George is the ADHD on-duty 24/Seven security dog; ready to yap extremely loudly at ANY unusual noise within 5 Km of the property.  The smell, sight or rumour of a cat will send George into wild hysterics - with mad yappy insistent barking plus running all over the garden, accompanied by vigorous sniffing under the gate.  the only time he excels in his hysteria is on Walkies - where, if he spots another dog which he hates on sight (90%) he will literally scream - so loudly and so high pitched, that bystanders assume he has either been hit by a car - and/or physically abused by myself.  On numerous occasions, I have had worried citizens rush from their houses to glare accusingly at me for imagined animal cruelty to the poor wee man.


I shrug and look as innocent as possible:  'He's seen another dog!  It's OK.  I didn't touch him!'
Yeah right - you cruel bastard. 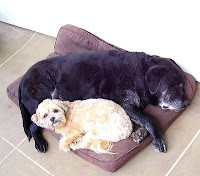 Yennyhoo - Phil runs The Best Food & Tours in Auckland - when he isn't abusing small animals.
Posted by Phil at 12:11 AM 0 comments