A visit to Languedoc-Roussillon

As part of a family trip to Europe last July, we spent a week in stonkingly hot (45C) southern France with three days based in Carcassonne. Venturing out of our air-conditioned Airbnb apartment to take wine tours with a local boutique operator, we covered two local appellations – Corbières and Minervois.
Languedoc-Roussillon for many years was regarded as a bulk producer of cheap and not very good wine. The European ‘wine lake’ phenom of the 1980s was largely due to hyperproduction from this very region. However, things have changed. Modern winemaking techniques have resulted in much better quality wine, and some boutique wineries are stepping away from the hidebound French appellation rules and growing non-traditional varieties such as cabernet sauvignon and pinot noir. 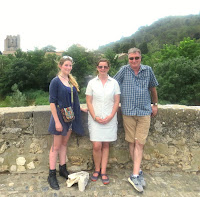 The hot, dry region grows approx 75% red grapes including carignan, grenache, cinsault, mourvèdre, syrah and merlot.  Whites include a number of obscure varieties like clairette, rolle, and picpoul and a few standards such as muscat, viognier and chardonnay.

Languedoc boasts 320 days of sunshine and I can confirm that there is sun - and a lot of it. Most days when we exited the Airbnb we would subconsciously head straight for the shady cool side of the street. Local history is quite fascinating and sadly barbaric. An 11th Century heretical Christian sect known as Cathars flourished and built many churches, and becoming the majority religion in many places in the region. Within a hundred years, they were ruthlessly persecuted and exterminated by the mainstream Catholic church.

Sorry to kill the holiday atmos.  Anyhoo – here we go with some ab fab local wines. 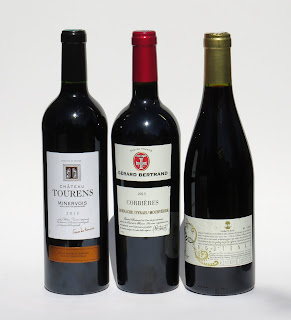 Châteu Tourens Minervois Languedoc-Roussillon 2013  $NZ 16.40
Typically French and a tad rustic, it has slightly dusty aromas with prune and plums. In the mouth it’s plummy, savoury and earthy with soft tannins and hints of rhubarb and liquorice. Medium bodied and soft. Match with mushroom risotto.
Availability – Regional Wines & Spirits Wellington.

Mother’s Ruin. The Demon Drink. G&T.
Gin has had many incarnations over hundreds of years – from the cheap and nasty opiate of 17th C masses to the boutique hipster thirst-quencher of millennials.

The early 17th century marks the first production of gin in the Netherlands. In Holland it was regarded as a medicine and was sold in apothecary shops to treat stomach problems, gout and gallstones. And to make it more palatable, the Dutch flavoured it with juniper, which also had purported medicinal properties.
In 1730, London had over 7,000 shops that sold only spirits. As consumption of gin increased alarmingly, the government introduced a distiller’s licence of £50, a huge sum in those days. This essentially created a black market in illegal gin of dubious quality. Then, heavy government restrictions in favour of the powerful beer lobby drove gin production underground, and almost out of existence.

The Empire Strikes Back.
Then when the British Crown took over governance of India, British expats struggled  with the ravages of malaria. A local folk cure came from the bark of the chinchona or ‘fever tree’, which contained bitter quinine. To make it more pleasant, sugar, lime, ice and gin were added – and thus the G&T was born.

Here's a selection of 8 NZ made gins. 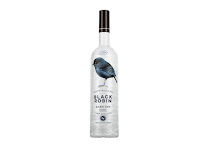 Black Robin Rare Gin 750 ml 43% alcohol $NZ69.99
With native Horopito and juniper in the mix of 11 botanicals, Black Robin is named for the endangered Chatham Islands Black Robin. A portion of the profits are donated to the Royal Forest and Bird Protection Society of NZ.
Aromas and flavours of juniper, lemon squash and bitter almond, with a hint of cloves. Opens up in the mouth soft and sweet with a nudge of liquorice.

Matakana Moonshine 700ml 37.2% alcohol $NZ36.70
Much softer than the Black Robin at 5.8% less ABV. Soft and subtle with stem ginger, gardenia florals and sandalwood.  Produced by In The Bush Ltd., they scooped a Bronze Medal at the San Francisco World Spirits Competition.

Source Pure Cardrona Gin 750ml 47% alcohol $NZ79.99
All the way from the Deep South, with classy packaging in a nice oblong bottle.
Batch distilled eight times over copper pot and column stills. They include botanicals of juniper, coriander, angelica, lemon & orange zest, plus rose hip.
One the nose, it’s assertive with coriander and juniper and a hint of pine resin.   Flavours of marshmallow plus all of the above botanicals.

Vaione Premium Pacific Gin 1 litre 40.2% alcohol  $NZ74.99
Pacifica style branding with fern leaves and tapa cloth images. Lime and orange dominate the palate. On the nose, there are cinnamon and clove aromas. In the mouth it’s very soft and integrated with flavours of cake spices and orange zest.

Karven Dry Gin 700ml  40.8% alcohol  $NZ74.99
Made by Puhoi based Ukrainian expat Alex Kirichuk. Has picked up two international awards. Botanicals include Manuka flower. On the nose it’s orange zest, cinnamon and clove, opening out on the palate with soft integrated flavours of cake spices and candied orange peel. 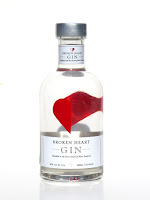 Broken Heart Gin 700ml 40% alcohol $NZ64.99
Another one from the Deep South – this time Queenstown. Uses glacial water from Queenstown. The brand reflects the relationship between two German master distillers who launched the brand. Joerg was a pilot and Bernd an engineer. Sadly, Bernd died after battling illness and Joerg’s gin is a testament to their friendship. Nose of juniper, lime and cumin.  With soft and spicy flavours of orange and lime

For availability – I highly recommend http://www.wine-searcher.com/