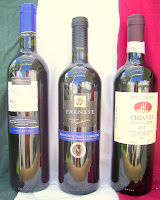 For all its distance - the wine, food and culture of Italy seem to have an endless fascination for Aucklanders.  And not unlike the rest of the world, we have been eager to embrace panini, espresso, cappuccino, pasta, pizza, Chianti, Prada, and a whole bunch of other stuff ending in a, e, i and o.

Italy has for many years been predominantly a bulk wine producer (second only in global output to France), pumping out gazillions of litres of fairly mediocre wines into Europe and beyond.
As a general rule, any wine produced south of Rome is probably not going to be of very high quality.  Regions like Puglia and Sicily are hugely productive hot climate areas producing the bulk of Italy’s easy drinking lightweight wines – often simply called ‘Vino di Tavola’ – table wine, made from blended varieties.  These wines are generally pretty good value, but nothing remarkable.

Having said that, there are some interesting wines worth seeking out in NZ.  Here are a few I randomly sourced locally:

San Crispino Chianti 2002 $21.95
Sourced from the Auckland Fish Market’s wine ‘Cellar’. This one was a gamble – being ten years old, despite its DOCG label.  Realistically, it’s pretty well over the hill age-wise but carries echoes of nice Chianti which should have been at its peak about 5 years ago.  Has some nice raisiny and Sherry characters with medium tannins.

Farnese Montepulciano D’abruzzo  (Docg) 2010  $17.00
The Abruzzo region of Italy is synonymous with the Montepulciano grape variety – and this wine is a very good example.  Soft, extremely ripe and fruity – this is a great value wine which delivers the goods.  Black currant, prunes and dark cherry flavours and spice with silky tannins.

San Marzano Primitivo Puglia 2010  $18.00
Primitivo is a robust wine which grows well in southern Italy. It is rumoured to be the same grape variety as Zinfandel – the mainstay of California’s  blockbuster reds.  Similarly, this is a big wine with fairly assertive tannins but it is very ripe and drinkable, with cherry, spice and toasty vanilla oak influence.


Today I had a one-person tour. I.e. just me and one passenger.
Normally I don’t take singles, because the margins are fairly low and it’s a gamble as to who you get on the day. Yet, strangely enough I have had some fascinating people on these one-off tours as well as a few very odd ones.
Odd ones:  A manic New York lawyer who hired me for $100 an hour to drive him around Auckland, looking at architecture.  He insisted on the air-con being on maximum, so I had to shout at him to be heard over the freezing cooling fans and could barely hear his many rabid questions.  Then there was the  US State Dept. Guy who said almost nothing during a full day tour.
Interesting ones:  Charming female Melbourne based romance novel writer (as yet unpublished) who seems to have a healthy inheritance and pops over to NZ almost yearly.  An old  ex-British Royal Navy captain who loved wines, but insisted on following a road map of our progress on the day.  A sad 60-ish Frenchman who had married a British lass, raised a family, ran a country pub and his beloved  French restaurant, till she ran off with the rep from the beer company, and took half of everything.

But today – John.  Ex British Air Force, born in 1932 in Cornwall.  Was a fighter pilot till he changed to air traffic control in the 60s and eventually ended up at Heathrow, London.  He was offered an air traffic  job in the ‘colonies’ in 1967 with a choice of Hong Kong, Australia or New Zealand.  He chose NZ.
When I picked him up, he was neatly dressed – shirt and tie, (plus a necessary rain jacket) and a baseball cap.  He is now eighty years old but has a keenness, humour and vitality which defies the years.  John also has a great knowledge of wine.

When he was in high school (about 1948) his school did a student exchange with a French school. He was plunged into the French culture and stayed with a family in Bordeaux, who were associated with some of the top red wine producers in France.  Thus began his passion for wine.

Interestingly, he was an air traffic controller at Wellington Airport for many years – overseeing many a hairy landing on its notorious short and wind buffeted runway.  Also, he was on duty the night of the Kaikoura UFO incident where speeding objects were tracked on Wellington aviation radar on the South Island’s east coast – doing speeds of 240 knots.  John swears they weren't the planet Venus, fishing lights or migratory birds.

What a fascinating chap.  But he hates Chardonnay. 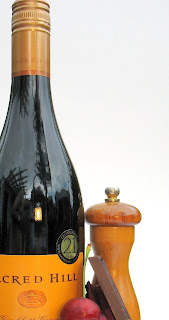 One of the distinctive aromas and flavours of Syrah (or Shiraz as the Aussies say), is black pepper.  This is very helpful when you're doing a wine options contest and need to identifiy the variety.  One whiff of fresh ground pepper and you can pretty well nail it as a Syrah/Shiraz.

Now, wine science is filling in the blanks for us with a new study which has identified a chemical compound - rotundone, as the common factor in both the wine and the spice. See here for the New York Times article.

Meanwhile, our own New Zealand Syrah grapes are producing some stunning wines, particularly from Hawkes Bay's Gimblett Gravels appellation region.  Longer and hotter Hawkes bay summers combined with the gravelly red metal soils in the region seem to be a winning combination which makes for full bodied, ripe and fruity reds with silky tannins.  As pictured left - Sacred Hill is a top performer.