It’s a rainy Friday night in Auckland. The humid nor-wester blows in like the exhaust tube from a clothes dryer - and saturates the city in gentle, warm rain. Somewhere, a duck quacks.


Outside, cars hiss through the steamy wet streets as Aucklanders head home for a long weekend.


In his secret lair, NZWineblogger hunches over his PC, a glass of Matua Valley Pinot Gris at hand (bloody good and on special at $7.50 and also annoyingly - quite warm because he forgot to stick it in the fridge this morning).

In the background, he has Emmylou Harris on really LOUD playing the Brand New Dance on CD because he believes that downloaded music is stealing from talented musicians. His charming assistant is away in Waiheke for the weekend at a wedding, so he plans a selfish night of music, wine and defrosted stew with mashed spuds. He pauses to feel guilty about the noise level. He takes another swig of Pinot Gris and shrugs his shoulders. What the hey – it’s only 7.16 and the neighbours are noisy, unfriendly pricks anyway.

The PG starts to kick in and he feels suddenly very attractive, slightly amorous and amusing.

OK Grüner Veltliner. Probably the most famous dry style wine from Austria. And rumoured to be a distant cousin of Gewürztraminer.  From my German Language night school classes I figure that the correct pronunciation is: Grooner Felt-Leaner.  Das umlaut (ü) in German is pronounced as an 'oo' sound, but with the mouth making an 'ee' shape.
West Auckland winery Coopers Creek have a reputation for introducing obscure grape varieties to NZ. They were one of the first to produce Pinot Gris and Arneis. Grüner Veltliner is the latest in this series.

Verdict: Coopers Creek Grüner Veltliner 2010 $NZ22.00
I’m not sure what the ageing potential of this wine is. As a one-year-old it is quite complex. To me, it’s a food wine i.e. a bit too multifactored as an aperitif style.
Flavours – probably peg it in Pinot Gris territory, but quite dry and with herbal spicy notes. So I’m tasting apple, pear, nectarine fennel and lime. I think it would be a great match well with seafood – mussels, oysters – or a creamy Marinara pasta. I probably need to sample another bottle to get a real bead on the style. Watch this space. 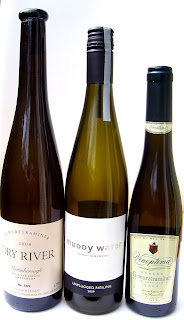 Dessert wines, or ‘stickies’ tend to polarise drinkers. You can tell as soon as they take a sip: a smile of pure pleasure or grimace of sugar overload. The wines also fall into two categories – light, floral extremely fruity freeze concentrated styles, or the lush oily late harvest and/or botrytised (noble) style.


Freezing grape juice prior to fermentation separates ice crystals from very sweet juice – allowing the winemaker to produce a sweeter than average wine. Late harvest wines are made from grapes left on the vine till they shrivel like sultanas with a high level of natural sugar. In the botrytised style, fungus infects grapes late in the season and sucks out water content, adding a honey-like flavour. In France they call it ‘noble rot’.

These wines are usually sold in a 375 ml half bottle and the labour content is reflected the price – so the freeze concentrated wines are generally much cheaper (around $15), while the late harvest or botrytised ones going for upward of $30.

Food matches? The French like to eat pâté with their sweet wines – the rich savoury flavours complementing sweetness and acidity. Similarly, cheddars and blue cheeses are a good match. My personal favourite is with French Toast – the ultimate brekkie treat!

Premium dessert wine from the iconic Nobilo winemaking family. Nick, son of company founder Nikola, has a winery dedicated solely to Gewürz. This is a classic example of a botrytised/late harvest, with flavours of honey, spice and citrus.

Another top level wine in the late harvest style – spicy, luscious and tropical with peach, ginger and Turkish delight flavours. 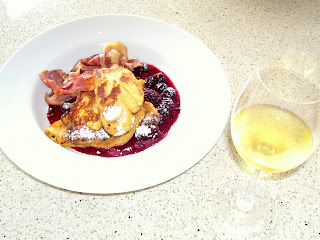 Dog poop is part of the deal when you have a dog. And the amount of poop is proportional to the size of the dog. I have had three Labs in my life in a row and I can tell you the Black Lab, because of his voracious appetite, is a veritable poo factory – producing an endless variety of freeform sculptures of diverse consistency and colour.

Yesterday I was pottering around in the garden – bringing in the tools I had been previously using to get them out of the rain.

Then the doorbell rang. “I’ll get it,” I yelled, as I sprinted in a sad 54 year-old sprinterly fashion, back into the kitchen, across the dining room, down the stairs, across the lobby and opened the door to the nice Asian courier man. He had some food tour goodies I ordered, and I scribbled on his computery tablet thing to signify acceptance and then he left.

Twas then I realised that I could smell fresh dog poop. Very fresh. That cloying sweet/foul/ nauseating unmistakeable dog poo odour. Yep – I had plonked my right shoe squarely in a large Jaspoo on sprinting from the garden and had tracked it all through the house to the front door in a one-legged right foot fashion.

However, when I went into the garage to store the wine tour goodies, I discovered that I had previously left my keys in there.

It then dawned on me that this poo has a silver lining.  Had I not, answered the door, and then been required to clean up the poo trail, I would not have found my keys parked in an odd place – and would quite likely driven myself mad trying to find the lost keys once I realised they were missing. 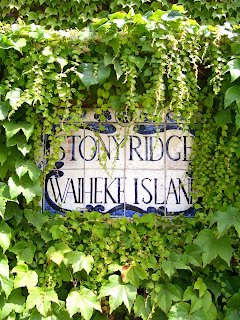 Hi again, dear reader.  Looks like I'm back on the boards for another year of fear and loathing in the new challenging economic environment.

By way of researching a tour option to Waiheke Island, my charming assistant and I recently ventured over the water to spend a day of tasting and driving the circuitous lanes of Wine Island Auckland.

Now, as a mainland City-based operator, Waiheke is a tad vexatious in that - heaps of foreign visitors want to go there and seem to have been primed before stepping off the plane with the concept that wine in Auckland = Waiheke Island.

Not true.  Historically, winemaking in NZ was largely begun in Kumeu wine region (30 min drive from the City) by Croatian immigrants way back in the early 20th century.  Waiheke is a relative newcomer with vines being planted in the 1980s.  And just an hour's drive north of the City we have Matakana - a boutique region only about 15 years old, which produces some of our best Sangiovese and Montepulciano.

Just the same, the wine fans stumble zombie-like off the international flights, eyes glazed, repeating 'I wanna go to Waiheke. I wanna go to Waiheke.'  Thus, I guess I'll have to set up some kind of Waiheke option.
Soooooo... we arranged a hire vehicle on the other side.  After picking us up from the ferry, the rental car guy's offsider drove for miles, and miles, and effing miles to the seedy car hire office.  The owner had an American accent and looked like an arms dealer - unshaven and ingratiatingly smiling as he talked flat out and got me to sign here.. and here.. and here, and finally - here; whence we uplifted the wreck of a vehicle and drove off.  (Slightly uncertainly as I have an automatic transmission and kept forgetting the old 'foot on the clutch when you start in gear' thing.)

Okay - Waiheke is bloody gorgeous.  I was biased, but after a day there I realised it is unique and does live up to the hype. The locally grown wines are fantastic, the food is fab, the scenery is breathtaking and (for the most part) winery staff are charming, patient and helpful.

Snotty Maitre D' at one of Waiheke's top eateries - po faced and officious when I suggested that the glass containing my wine had caught some kitchen odours and smelled of fried fish.  He appeared spectrally at the table side - clearly offended.  He had poured a new glass and claimed he could tell no difference.  I still could.  It ended in a nil all draw - he could have handled the whole thing much better.  Bad luck for him- won't be taking my clients there for lunch.

And A Happy New Year to my reader ...

OK New Years 2011 was a tad non-eventful for moi.  Just 2 days of Stat holidays before I was back into the fray with my International clients (god bless 'em).  Show me the money.  I'm not cheap but, boy I'm good.

And truthfully-  I can't remotely, (and never have been able), to get excited about one day rolling into another to represent some arbitrary human division of one calendar year from another.  Who's to say New Year isn't the Winter Solstice?  Or my birthday - the 7th of August?

Here's to the annual 7th August Philiday Public Holiday  - and cause for wild feasting, drinking and shagging, and playing old Led Zep and Creedence Clearwater REALLY LOUD.  (preceded by Philiday's Eve).
Philday's Eve will be in the same spirit of wild feasting, drinking and shagging - but with slightly more introspective music like Pink Floyd, Roxy Music, Talking Heads, and occasional Alt.Country like The Be Good Tanyas and  Gillian Welch.

For most NZers, Christmas and New Year represents a couple of weeks off - when most of NZ actually pulls down the blinds, locks the front door and buggers off for two weeks at the beach to indulge in too much sun, sand, surf, sleep and alcohol.  Nice non-work if you can get it.  Happily I am not remotely a beach bunny  - and I am quite happy to host charmingly inebriated foreign guests around some of our finest wine producers in an air-conditioned vehicle, while stopping for a fab lunch in the countryside.  This probably sounds fecking fabulous - other than the fact that Good Ol' Freddy Mack & Fanny Mae basically screwed tourism for the last two years with the fallout from their habit of lending 120% mortgages to psychotic bag ladies from Minnesota.

Not that I'm bitter.  No - just fumingly mad and slightly homicidal.  My numbers dropped from about 900 clients a year pre-recession, to about 350.

However, things are looking better. Sort of.  We clutch the Cargo Cult vision of the World Rugby Cup (TM ) to our skinny bosoms in the hope that this will turn out to be an economic Bonanza for New Zealand - and Auckland in particular.   And it's only NINE MONTHS away - so hopefully we can all keep the bailiffs at bay with sticks and small but scary dogs till then.

Phil runs Auckland Wine Tours, writes stuff and sells his belongings on the Internet to make ends meet.
Posted by Phil at 3:20 AM 2 comments