Thirty years ago, if someone had told me (as a 26 year-old physiotherapist with his own practice) that in 2012 I’d have four or more jobs – I would have been incredulous.  Back then, I thought that I was into a secure lifetime career which would only end if I sold it the practice to retire in splendour, or carked it at work and was carried out feet first.  Today I run a wine tour company, write wine articles and other freelance journalism, work three shifts a week in a wine store, have done some acting in TV commercials, do some home-based massage and manual therapy ...and I’m working on my second wine book when I find a spare moment.

Right now we live in a totally changed world.  Jobs that were once sexy and lucrative are marginal now.  I had to walk away from my physio practice because of declining patient numbers and a hostile environment for state funded health providers who work in low income areas.  A good friend of mine who was a senior social worker now makes more money being a home handyman at a retirement home.  The jobs that he and I trained for were once viable in a healthy economy that had social welfare as an affordable priority.

Health, social work and education - and Law, to a lesser extent, were areas where a lot of us Hippy era kids were attracted.  Trades were regarded as a good option for the kids who weren’t so bright.  Finance and commerce were uncool and more like working for the Man.  Computers were for science geeks and bean counters.  A web site was something where spiders lived.  Banking, Accountancy?  No way – they were part of The Establishment.

So did I make a bad choice when I decided to go to physiotherapy school?  No. In 1974, I had opted for a hot profession, just like the other kids who did Law, Medicine, social work and teaching.

Now, the old certainties are gone and employment is subject to the repercussions of global financial crises, international terrorism, an ageing population, scarcity of fossil fuels and even climate change.  Tourism was hot when I launched an Auckland wine tour business aimed at international tourists in 2001.  Since then the Twin Towers bombing and the global financial crisis have reduced tourism numbers dramatically.  So, I looked elsewhere to augment my income, and hence – my multiple income streams.  Do I regret it?  No.  I have been pushed out of my comfort zone and into areas I never dreamed of like acting and retail sales.  It’s not easy – I do three late shifts a week selling wine and that cuts in to family and social time.  I work very hard some days putting in 13 hours when a wine tour and a late shift coincide.  On the other hand some weeks I get three or four days off – so I get some time to catch up with friends, walk the dogs etc.

The only thing that is certain is uncertainty.  Welcome to the new millennium.

Phil runs the No. 1  TripAdvisorAuckland tour activity – Fine Wine & Food Tours.  Also writes wine columns for Ponsonby News, Medical Assurance’s OnMas glossy quarterly, works Monday Thursday and Saturday at Glengarry Grey Lynn, and is available for TV or web based commercials and can fix a crook back or neck.

Wines for the Auckland Summer 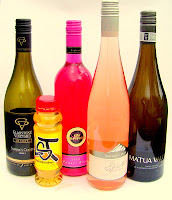 Summertime… time to bid farewell to big grunty Shiraz and Cabernet blends.  A time to smell the  sun block and barbecue smoke, feel the sand between your toes and listen cricket on the radio.  And time to embrace wines and drinks that can stand a bit of chilling and match well with outdoor entertaining, salads, BBQs and our fabulous fresh Auckland seafood. Cheers!

Pale blush pink colour, off-dry style with aromas and flavours of red summer berry fruits.  Crisp and refreshing with a spritz of bubbles and 10% alcohol make this a great summer cooler quaffer.

Kim Crawford Pansy Rosé  2012 $NZ 25.00
Marketed at the gay community in 2005, Pansy has become a favourite with summer sippers. Vibrant pink, this fresh and just off-dry rosé is all strawberries and cream and red berry fruits.

Phil Parker is a wine writer and operates FineWine & Food Tours in Auckland.
Posted by Phil at 8:28 PM 0 comments