In my capacity as sometime wine scribe, and for my sins, I have been invited to join the newly formed WWNZ – Wine Writers of New Zealand.  To my knowledge, this is the first formal wine writing association in NZ.


The formal objectives are, broadly: to uphold a high standard of wine journalism, to encourage professional development amongst members, to provide members with a common voice, and to  deliver workshops, meetings, talks and tastings.

The launch was held at the Roxy restaurant in Fort Street, a suitably a (ahem) colourful area for a bunch of wine writers to launch their club.
The AGM was combined with a tasting of wines from local wine importers Dhall & Nash (www.dnfinewine.com)  a specialty fine wine importer supplying mail order and ‘on premise’ - that’s trade talk for licensed restaurants and cafés. They are a relatively new company, founded by Puneet Dhall and Brandon Nash.


The wines were in three flights of 6, including wines from France, Spain, Italy, USA, Chile, Argentina, and Australia.  They were all pretty stunning, but here’s a few highlights:

Billecart Salmon Brut Champagne NV France $160.00 This is a mouth-filling sparkler with a creamy texture and flavours of peach and nectarine with a hint of toast.
Alphonse Mellot Pouilly Fumé 2011 Loire France $45.00
From the home of Sauvignon Blanc – pale gold in colour, with a fruity but not acidic palate of white peach and apple.

Rene Mure Gewürztraminer 2011 Alsace France $28.50
Not much on the nose, but I caught a hint of lychee fruit.  However on the palate it really opened up with sweetness and flavours of crystallised ginger, lychee and sweet spices.

Domaine Albert Ponelle Mersault 2010  France $70.00
Chardonnay is the grape variety here.  Floral aromas and lengthy flavours and of peach and nectarine with a hint of spicy vanilla oak.

Cillar Des Silos Crianza 2008 Spain $39.95
Garnet red colour, with medium tannins, pot pourri aromas and flavours of black berry fruit with a hint of savoury spice.  Crianza reds have to be cellared for a minimum of two years by Spanish law.


Santa Ana La Mascota Malbec 2010 Argentina $28.50
A prime example of why South American Malbecs are so popular. Aromas of sultanas and black cherry, with ripe palate of chocolate, blueberry, and spice.


Cypres de Climens Barsac 2006 France $65.00
Barsac is very close to Sauternes, the fabled sweet wine from Bordeaux made from grapes affected by ‘noble rot’ – a fungus that extracts the water and intensifies sugar in the berries.  Orange gold in colour with intense sweet flavours of macerated dried fruit and honey.


Phil Parker is a wine writer and operates boutique Fine Wine Tours in Auckland.
Posted by Phil at 8:54 PM 0 comments 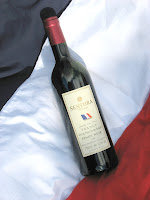 While we owe the majority of today’s wine making legacy in NZ to immigrants from Croatia’s Adriatic coast, there has been a Gallic wine influence here from early days.
As early as 1838 French Catholic missionary priests arrived in NZ’s far north.  By 1858, the missionaries moved to Hawkes Bay and vines were planted there to produce both sacramental and table wines. And Mission Vineyards holds the record for the first commercial sale of wine in New Zealand in 1870. Today Mission Estate continues to produce wines and is Hawkes Bay’s oldest winery.  We also have some local immigrant French wine producers, for example Daniel Le Brun, Domaine Georges Michel, and Clos Henri – all from Marlborough.

For most of us with a limited wine budget, French wine has been pretty well out of reach for many years.  Though French wine imports are still lagging way behind Australia, Italy, and South America, we are starting to see some medium priced wines from France on the shelves of our wine specialty stores.  Some of them even, Sacré Bleu!! Under screw cap closure.

This month, I decided to pick three random French wines from my local Glengarry wine outlet and put them up against three of my favourite New Zealand wines.  As I had expected, the French white wines were more mineral and less fruit led.  The French red, by comparison stood up well as a fruity, ripe and very good value.

It does depend on the individual palate, but to my tastes I’ll stick to NZ white wines.  On the other hand we should be aware that there are some very good value French reds out there that will give our Pinot Noir and Syrah a run for their money - if you’re keen to hunt them out.

Laroche De La Chevalier Chardonnay  2011 $18.00
This one is an unpretentious Vin de Pays d’Oc (wine of the country) from the Languedoc-Roussillon region in region of Southern France. A crisp and mineral style of Chardonnay with some light oak flavours and a hint of quince and apple. Restrained and elegant rather than the in-your-face buttery fruit bomb style that can emerge from Gisborne or Hawkes Bay.

Bourillon L’Indigene Vouvray 2004 $49.00
A bargain that I picked up in bin-end sale, and standing up very well for a nine year-old wine.  Vouvray is an appellation from the Touraine region of the Loire valley in France, and refers to wines made exclusively from Chenin Blanc and is often oak aged.  Still some pineapple fruit flavours with subtle yet integrated oak flavours.  Very reminiscent of an aged Chardonnay.

St Cosme Little James’ Basket Press  Grenache $22.00
Château de St. Cosme is located in southern France’s Provence region. Another bargain. I took a punt on this one despite the cutesy label that features cartoon characters in the vineyard.  This is an NV wine i.e. non-vintage; a blend of different years’ Grenache.  Extremely good value. Very soft, ripe and drinkable with black berry fruits and savoury flavours.

Rimu Grove Bronte Nelson Pinot Gris 2010 $23.00
Winemaker and owner, Patrick Stowe comes from a wine family from Napa USA.  One of my favourite wineries to visit in Nelson. This wine is light, elegant and crisp with flavours of mandarin, marzipan and apple.

Dry River Martinborough Craighall Riesling 2009 $45.00
I pulled this one out of my modest cellar, just to see how it was developing. Dry River recommends putting the Craighall 2009 away for five to seven years.  Still lots of fruit flavours there – lime, grapefruit and white peach with a strong backbone of minerality and mouth-watering crispness.