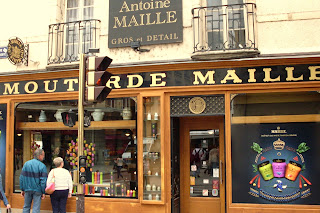 After our first three nights in France spent in Paris, we caught the TGV fast train to Dijon.  Train a Grande Vitesse – sounds so sexy.
I was expecting airline seats and buckle-in belts, but no.    The ride was incredibly smooth and quiet, and the speed at over 200Kph was almost imperceptible.  Trees, green pastureland and lamp posts flicked by silently in a blur.

After the wide streets and boulevards of Paris, Dijon made a charming contrast- with cobbled streets and ancient half-timbered houses abounding.
Considering that it is the gateway to the famous Burgundy wine region, Dijon is pretty low key and small.  It is also a student town, with many students living on the outskirts.
The University of Burgundy enrols 27,000 students, among whom are 3,000 international students, every year.

Arguably more famous for its whole grain mustards, Dijon is at the start of the French wine region which gave us Chardonnay and Pinot Noir – my two favourite wines.
I have always found French wines particularly confusing because of the labelling – invariably it states the Chateau and the region, and beyond that, you’re pretty well in the dark as to what grape variety was used and who made it.  The nice thing about Burgundy is that they really only do four grape varieties:  Chardonnay, Aligoté (both white), Gamay and Pinot Noir (both red).  They don’t blend a whole swag of grapes together like they do in Bordeaux and then call it ‘Chateau Je Ne Sais Feckin Quois’ – leaving it up to your neophyte imbiber to try to figure out what the hell it is.

We took a tour with local Burgundy wine tour company and headed out of Dijon – through famous  villages that give their name to most of the wines:  Couchey, Fixin, Gevrey Chambertin, Cotes de Nuits, Chambolle Musigny, Vougeot, Romanée Conti, Nuits St.Georges, Vosne-Romanée, Côtes de Beaune,  Alex Corton,  Pernand-Vergelesses and Pommard.

We tasted wines in four wineries – honestly a blur of stunning scenery and memorable wines.  Aligoté Is a fairly simple white wine with crisp apple/raising flavours.  The Chardonnays were very mineral and dry compared to our fruit bomb creamy delights from Gisborne.  The Pinot Noirs were a tad too earthy and dry for my palate.
I guess it’s all about context.  If you are brought up Burgundy and drink local wines with local foods, it  all makes sense.  I wish I had more time there to fully explore, sample and absorb.  A one-day wine tour is just a snapshot.  Hopefully, one day I’ll be  back.