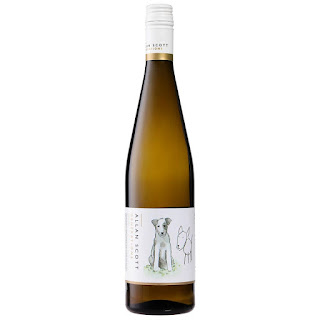 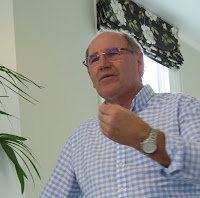 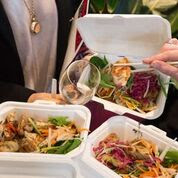 Just last week I was invited the launch of a new release from the Allan Scott Family Winemakers label – the 2016 Marlborough Gewürztraminer. The Alan Scott winery is owned by founder Allan Scott and his family. Allan was a pioneering  wine grower, planting the first vines in the Marlborough region back in 1973 when he worked as viticulturist for Montana. He subsequently worked for Corbans before starting his own operation.
Wife, Catherine runs the cellar door and also oversee their Twelve Trees Restaurant at the winery. Son Josh (who founded the Moa beer) is wine maker.  Daughters Sara and Victoria are involved in viticulture and marketing, respectively.

On a rainy day, the launch was held in deepest Grey Lynn. Appropriately, the food match was fresh dumplings !

Allan Scott Generations Marlborough Gewürztraminer 2016 $NZ26
Pale green gold in the glass, it has the typical Gewürtz aromas of lychee fruit and Turkish delight.
Swished around in the mouth, it opens up with a just off-dry palate of tinned lychee, perfumey Turkish delight, with added tangy yeast and hint of green herbs. Some time in oak has added extra complexity. 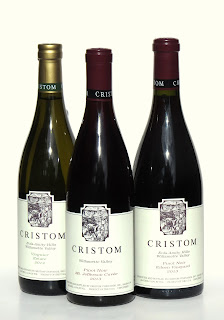 Cristom Vineyards is a relatively new label, hailing from the Willamette Valley in Oregon USA. Willamette Valley is a USA AVA.
Pardon my TLA (Three Letter Acronym).  AVA = American Viticultural Area. That is, a designated wine growing region within the United States of America and distinguishable by geographic features and boundaries. (Not unlike the French appellation controllé system). Oregon, in general, is famous for its Pinot Noirs and cooler climate grape varieties
Cristom Vineyards is the result of collaboration since 1992, between an engineer, a winemaker and a farmer. Founder Paul Gerrie hired winemaker Steve Doerner and Vineyard Manager Mark Feltz in 1992. Together at the winery since day one, they have consistently produced excellent wines.
Cristom Eola-Amity Hills Willamette Valley Oregon USA Viognier 2014 $NZD 40
Sealed with a very smart glass stopper. Fermented in a combination of stainless steel and oak, it is pale gold in the glass and smells of poached pear with a whiff of blond tobacco and vanilla. In the mouth it starts with subtlety then broadens out with peach, clover honey, quince and nectarine and then closes with an elegant and lengthy dry palate.

Cristom Mt. Jefferson Cuvee Willamette Valley Oregon USA Pinot Noir 2013 $NZD 40
Very much in the Burgundian Pinot Noir style. Translucent and a bit shy in the aromas, but has a whiff of plum, and savoury truffle. Lean and elegant, with mildly astringent tannins and mainly earthy flavours, plus plum, black currant, truffle and dark chocolate.

Phil runs the best wine tours in the known Universe