As well as being an all time nice bloke and kind to animals sort of person - I have a reputation as a maker of pretty damn fine Tomato Chutney.  Many grateful passengers on my tours have enjoyed, and indeed - begged, for this recipe.  It is great with either cheeses or cold meats.  Or even kind of guiltily licked from the jar when nobody is looking.

So, dear reader (you knows who you is) - here it is for the first time on the Information SuperHighway InterWeb :  Phil's Damn Fine Internationally And Totally, like, Famous Tomato Chutney.

2 pounds (1Kg) tomatoes, chopped: finely as you can be bothered.

Dessert spoons of any of the following, according to taste: grated ginger, Anise, Cinnamon, Cumin, Cloves, thinly sliced Garlic 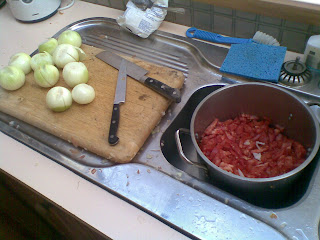 NOW .. there is a trick to chopping a shiteload of onions without becoming terminally dehydrated by totally pointless crying.  I was told this years ago but didn't really believe it:  OK - slice your onion in half: 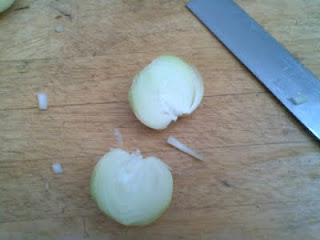 Then chop it into parallel slices.   Now, I have read that the whole smelly and eye-watering thing with onions and garlic and such is actually a protective measure. I.e. once the onion realises that it has been chopped, It gets all defensive and releases noxious eye-watering chemicals in order to deter the assailant. 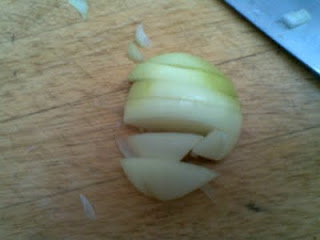 So the trick is: to cut it up before it knows that it's dead.  So .. next - chop it very quickly after rotating the sliced onion 180 degrees. 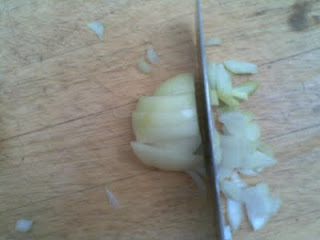 Put tomatoes and onions into a non-metal bowl. Sprinkle with salt and leave for 12 hours. 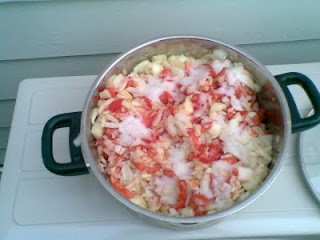 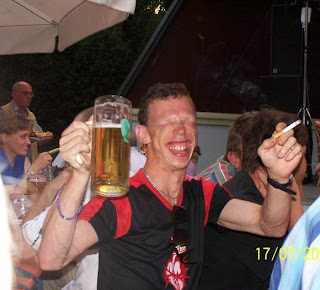 Okay. I have met some interesting people over the last ten years while running my fabulous World Famous Auckland Wine Tours.

(Ahem) rated the “No. 1 best activity to do in Auckland City, New Zealand” by TripAdvisor.

Most people, in fact the vast majority, are wine enthusiasts who get the general idea of a wine tour. I.e. go to some wineries, sample some selected wines (sniff, savour, evaluate, spit or tip), move on to the next winery. However, some folk have their own concept of what constitutes an ‘wine tour’ and tend to go off on tangential trajectories much to the surprise and general fear and loathing of other passengers - and yours truly. Bear in mind, that most Cellar Door tasting rooms in NZ have a good line-up of wines – often up to ten available to sample, plus they are very generous with sample amounts. And they usually do not charge a tasting fee.

For the sake of brevity and the cheap opportunity to demean and humiliate others from afar, I have categorised them thus:

GULPERS – When the cellar door staff say ‘Now, where would you like to start?’ they say ‘At the top!’ and proceed to gulp down as many free samples as they can from Sauvignon Blanc, to reds to dessert wines. They really don’t give a toss what they drink – they just want to get plastered for free. Some even con extras by asking for another: ‘Oh, can I try that one again – I can’t quite make my mind up.’ These people never buy a bottle.

COLOURISTS – Now fair enough, some people just can’t handle a particular variety of wine so they avoid reds because of tannins, or they avoid whites because they think they are wimpy. But I do get some clients who have a preconceived idea of what New Zealand wines should taste like, and announce almost as soon on the tour, “We only drink reds.” or “We only drink whites.” I don’t have a major problem with that, but I find that if you can persuade them, often they will be surprised by the complexity and pure varietal flavours of all our wines, red and white. Among this group lurks the subset of ABC people– “Anything but Chardonnay!” These are poor deluded folk who had a bad Chardonnay experience circa 1982 when the wines were bright yellow, over-oaked shockers that tasted like a school desk soaked in methylated spirits. They prove one of the most intransigent groups – they refuse point blank to even sniff a lightly wooded fruit driven Chardy.

SWEETIES – Novice wine drinkers do tend to start with sweet wines. This is no crime and they are on the first steps of a wine journey, so it’s mean to be critical. However, the fact is that many wineries produce very little - or no sweet wines at all. This does make for a very short wine tour when you total tasting palette is four dessert wines. Occasionally I can encourage them to try off-dry to medium styles like Gewürztraminer, Pinot Gris or Riesling but on most occasions the reaction is the screwed up sucked-a-lemon face of the sugary wine fan.

COCKTAIL SIPPERS - These folk are generally gregarious, and don’t really know much about wine, but they love talking. So instead of the standard Sight, Swirl, Sniff, Savour, Spit routine – are more interested in chatting - with anecdotes about their vacation and general Life Story, all the while taking tiny sips of wine and talking and sipping and talking and sipping ….

WANDERERS – They generally do like the wines, but especially after a few they go into a sort of Wine Zen state and wander off to the gardens and cellar door surrounds, wine in hand, eyes glazed, to soak up the winery atmos. They return much later for another sample – and then wander off again from the main group.

GRUMPY OLD PEOPLE – These folk are almost exclusively from cruise ships where there is a culture of expecting to be both disappointed and ripped-off. These folk make an art of complaining and demanding: Can we have more air in the back? I can’t hear anything, speak louder! Where are the washrooms? How many native birds do you have? Are we going to see any kangaroos today? I think I left my eye glasses at the last winery! The crackers are too salty!  Stop the van - I feel nauseous!!

GROUPS - There is a certain critical mass with numbers of people on the tour.  My minibus seats a max of seven and that's about as large as I want.  Small numbers mean interaction and good company.  For me, that's why I enjoy running the tours - I meet people from all over the world and have the pleasure of introducing them to a wide range of our fantastic wines. Now groups are another matter. Numbers can vary from ten up 60.   Group tours have to be scheduled with the wineries and the lunch venue.  Generally - the more people, the more it becomes crisis management. Within the group will be all of the above - Gulpers, Sippers, Wanderers, Grumpy etc.
Not only do I personally provide tasting notes, witty informative commentary, answer dumb questions, and wrangle the cheese board, but I also have to try to keep to time.   The tours invariably run late and I have a migraine by the end of the day.  One of the worst was a two-bus, cruise ship group of 60 - where one bus got lost and we were an hour late for lunch. The Maitre D' had a hissy fit, ran away and never talked to me again.  At the end of the tour the bus drivers got all the tips.

Recently I scored a couple of tickets to Villa Maria's Auckland Day on the Green series, Roxy Music concert.  The Muttonbirds were the support - and as it turned out, the best thing.
Now, I am an older punter and was lucky to see Roxy Music way back in 1975 at the Auckland Town Hall - at the height of their popularity, and Country Life was the latest album. This was after they had ditched Brian Eno, and had acquired a young Plexiglas violin player Eddie Jobson. The violin was Plexiglas, not Eddie. He also played keyboards.  And apart from him, it was the classic lineup of Phil Manzanera on guitar, Andy McKay on sax, Paul Thompson on drums and ... one of the many faceless bass players who dropped in and out of the band over their career.

I was 19 and most of the audience were not much older - we knew all the songs by heart, and Bryan was greeted with rapturous applause as he sashayed on stage in white dinner jacket, bow tie and pink carnation.  The show was superb, with all the hits - Mother of Pearl, A Song for Europe, In Every Dream home a Heartache, Virginia Plain, Street Life,  Do The Strand (local reference by Bryan: "New Zealanders or Chinese!")  SFX: Crowd goes nuts - Applause Whoop Whistle!!  etc.
The sound was perfect, the venue was intimate enough and Bryan interacted in a slightly shy but awkwardly endearing way.  It remains one of the best concerts I've ever seen.

Fast forward ... Bryan Ferry In Concert, Auckland Civic Theatre circa 2004.
Mr Ferry is on tour with a bunch of shit hot backing musicians doing old Roxy Music songs plus a few of his own originals. But .. no atmos.  Bryan doesn't acknowledge the audience, the band plays with workmanlike skill and verve, but the reality is more like watching a DVD.  Interestingly, Bryan has a guest lead guitarist (can't remember who) dressed nattily in a brown suit, who collapses on stage about 1/3 into the show. I first notice when I see the brown suited axeman lying completely motionless on his back, guitar still strapped across his chest.  I thought 'Now is that some kind of minimal Zen Guitar Hero move, or is there something wrong?'  He was quickly dragged offstage (guitar still in place) feet dragging on the boards, whence medical people did emergency recuss stuff in the wings.  Clear!  Bzzzzzttt!!
Meanwhile, The Show Goes On - Bryan says nothing at all.  There is no mention in the press the next day.  For all I know, Mr Brown Suit may have been flown back to Blighty, dead as a doornail, in a pine box crossing airpaths with  the replacement axeman flying in on Air NZ for the rest of the tour.

Faster forward ... A lovely late summer evening at Villa Maria's sprawling Mangere estate. The Muttonbirds have just played a crisp and memorable set of their hits. I have had some superb wine and food supplied by the sponsor.   The sun goes down.  Lights go up ... ta dah!
Roxy Music is onstage.  Bryan has let a bit of grey show at the temples and looks like a tad older Edward Fox on the (very few) video screen shots.  For some reason - the original band (Phil, Andy, and Paul) all have kind of musical stunt doubles.  So there is an extra lead guitarist, sax player and drummer.  What the?
So the old guys go thru the motions on each song, but often hand over to the young thrusters for the hard bits.
Also there are three lithe women whose only job is to do ethereal jazz ballet dancy stuff, silhouetted against the back screen.  Normally the Video screen shows close-ups for the cheap seats people like moi who are miles from the stage - but this time the vids are all hippy pre-recorded swirly patterns and visual distractions, rather than a good look at what's happening onstage.  Bryan is again, hugely unengaged with the audience.  he may have said 'Hello Auckland.' but that was it. No song intros or friendly banter.  Just the obligatory 'name the band members' before the big finale. Then turn up the lights, we bugger off and wander back to try and find our cars in the gloomy park.

LOOKIE-LIKIE Phil Goff and Ruth Dyson. Are they - in fact - the same person?

Have they ever been seen in the same room at once??