Blondie, The Pretenders and the smell of the crowd (Concert review) 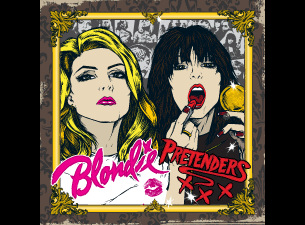 Last night we caught the Blondie/Pretenders Auckland show - the first of three in NZ , the other two being vineyard gigs.

Cut to the chase - excellent.
Auckland's cavernous Vector Arena even managed almost-okay sound quality where we were on the stalls floor area.  I swore I'd never sit at the raked back section again after being subjected to a roaring muffled wash of bass and echoey vocals at Bob Dylan and The Cure.

We missed the support band The Dukes, but arrived in time to get a nostalgic rum 'n' coke and find our seats in the refreshingly air conditioned Arena hangar.  First up - Blondie.  Deborah Harry appeared - to a rapturous response, dressed in a chunky white jacket, tutu, blonde wig and enormous black sunglasses.  It did look a tad like she was hiding behind all the gear, and she talked rather than sang through the first three songs, avoiding the high notes and hardly moving.  But by the time she'd ditched the shades and belted into Union City Men things were chugging along nicely. The Debbie Harry of old was summoned up and she rocked and sang just like she used to. Original co-founder Chris Stein on guitar was backed by a skilled younger lineup of bass, keyboards, drums and lead guitar.  They rolled through some new material - e.g Maria, but the hits were the winners, with the crowd (very tunefully) singing along - Rapture, Sunday Girl, Heart of Glass, The Tide is High, One Way or Another and Call Me.  By the end, Harry had also dropped the tutu and jacket to reveal a new slimline bod and fab pair of legs in a black hotpants suit.

Somewhere around this time, I noticed a subtle yet noxious smell in the row we were in. Hard to place ... damp cardboard ... dog shit ..fish ... cheese ... all four, yet somehow ... worse than the sum of its parts.
Then I nailed it - Smelly Sneakers.  Yup.  The young lady two seats away had worn her grooviest Chuck Taylors for style but not for aroma.  Good ol' Auckland heat and humidity had combined with rubber, canvas and sweaty feet to brew a pong worthy of a teenage boy.

Anyway,  we got a break while they set up for The Pretenders.  Chrissy Hynde didn't muck around.  Skinny legs clad in black jeans and a white shirt with rolled up sleeves - she kicked into a series of tight as a gnat's bum versions of some Pretenders gold - Precious, Brass in Pocket, Back On the Chain Gang, Talk of The Town, Don't Get Me Wrong.
Unfortunately, the audience (being average age around 50) were wee bit tired, and after all that hooting and clapping and standing up for Debbie and the boys, Chrissie Hynde struggled to maintain the crowd's momentum as they sat down for the less bouncy choons.  Where Blondie had presented an avalanche of very accessible singalong pop, The Pretenders presented as real Rawk band with a structured set and some quieter numbers.  But not to worry, the crowd lit up on the hits and sang along - ending with an appropriate version of Have Yourself a Merry Little Christmas and a stonking Brass in Pocket.

Great show.  Shame about the smell.
Posted by Phil at 9:13 PM